November 20, 2011
I guess there's always a story behind each eatery or Trattoria(Italian style eating establishment - that is more than the local mamak stalls and less than a restaurant for those of you who wants to know) in this case.

Of course that is not the story behind this trattoria. That's just where the name of trattoria came from. 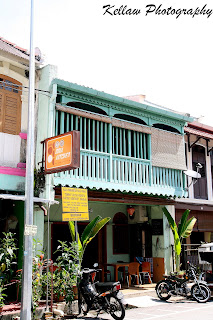 This trattoria hidden from the main road located at 102, Lebuh Muntri, just about 100 meters walk at the road facing directly in front of Cititel Hotel Penang. Look for their signboard on the left. I can tell you it's real easy to miss if you don't know where to find. 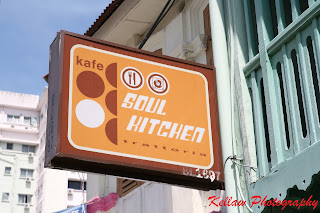 They even have their own post card which tells you where the trattoria's name came from. 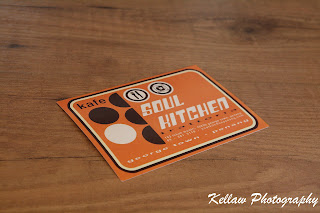 This trattoria is started by a quirky and loving Malaysian German couple, Michele and Tonio, who met in Munich, engaged in Venice, married in KL, lived in Berlin and finally back in Penang and started this trattoria. According to Tonio, Michele is the boss and he is just the chef... 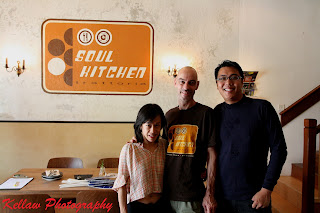 Menu of the day.. You can see that's a whole handfull of dishes.. One more thing is that they have their weekday lunch menu too priced at RM28 for one soup, fresh juice, choice from 6 pastas and a yummy dessert. Expensive you say? Wait till you see their ingredients. 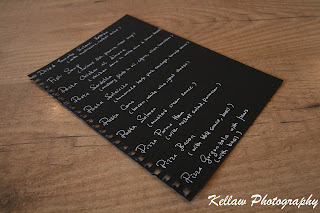 I would say the trattoria found it's right place in the Penang Heritage zone. The trattoria is just one of the units in the ancient chinese streetscape with 1960's Berlin's interior for you to enjoy your food. I would say this is truly a feeling you can't get anywhere else. Even I myself was taken aside by this homely feeling. 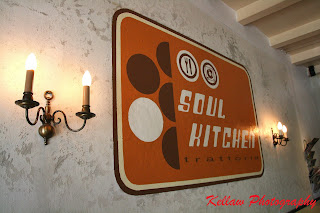 Ok enough about the place. Now we go for their food. I can frankly say I am not that familiar with Italian food other than pizzas and pastas but this is an eye opener or should I say mouth waterer.. This is the dried tomato salami entree. At first being the ape in the forest in a town now, I went for the mushrooms alone. It tasted... errmm cold? and someone told me to try it all together. The mix of dried tomatoes, salami, mushrooms and rocket salad taste like heaven, perfect for starters. 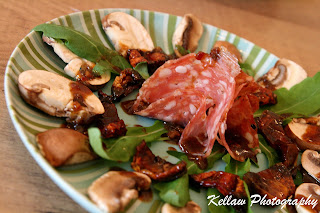 Next was the fish soup. Lots of fish (a mix of fishes as I was told), shrimps with a mix of potatoes and carrots and a dash of herb taste. I would say this is one of a kind of clear soup I had had in my life. Totally different from those Chinese herbal soup I cook in the kitchen. One thing is the potatoes wasn't cooked to softness. It's more of giving you the crunchy feel instead of being soft, just like those I expect from the carrots which were just soft enough yet retained it's crunchiness. Just nice! Note* I scopped the ingredients up for this pic so you guys could see what's in there. 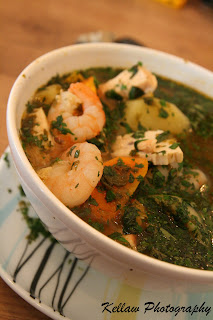 Next up we have the Pasta Chicken Al Limone. Chicken done in white wine and lemon juice. A little sour taste just perfect for the dish. The chicken is marinated just right for taste. I would recommend this for those on diet. It's low on cheese, and the sauce is low on carbs with a plus side of the acidic side of the lemon juice. 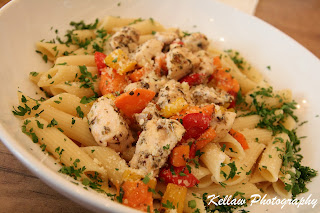 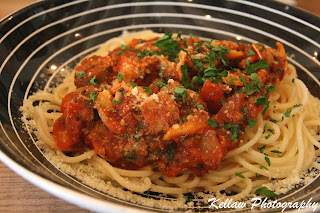 This baby named Pasta Como is a must try if you ever visit Soul Kitchen. Cooked with Bacon (they source their own bacon and only selected ones from the ribs are selected as per Tonio) which is perfectly tasty, white wine and goat cheese which gives it a one of a kind distinct taste. The mixture of the ingredients was just a perfect blend. 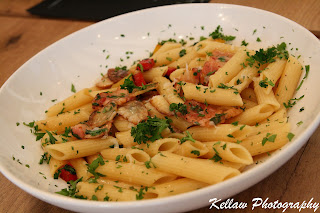 Then we have the Pasta Salmon with mustard cream sauce which I could taste that only fresh salmon was used to cook this dish. I can say I had enough of the distinct frozen salmon taste down my throat that I could recognize one from far away. I didn't put high hopes on this dish as first as I prejudged that they would use frozen salmon. When I had this, I was surprised there was no frozen salmon taste. They were fresh. 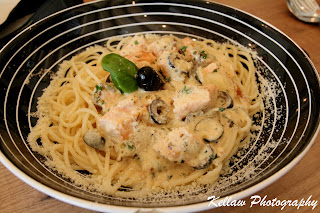 Here we have the Pasta Sardella, a more localized Malaysian flavor with a fusion of Italian taste cooked with anchovy filets in oil, capers, olives and tomatoes. 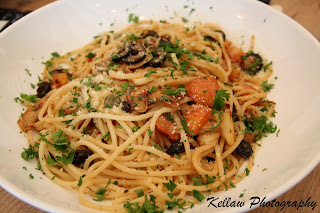 Next came the pizzas. This is the first time I came about an oval pizza. I have seen round ones, square ones but never an oval one. Imagine sitting in the trattoria while they bake this in the kitchen. The aroma and smell of the cheese in the over is just mouth watering. I told myself this is definitely what I must lay my hands on at that moment. After several minutes of agony waiting which seems like hours to me, it finally arrived. Pizza Parma Ham as it name suggest was made with parmesan cheese, ham and rocket salad. It's a simple dish actually but they made it so tasty and irresistable, I am just lost for words. Definitely 100% better than those delivery pizzas you could get with one call away. 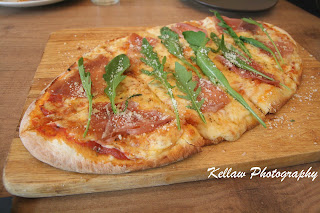 Then we have the Pizza Gorgonzola with Pears which was baked with basil and a touch of blue cheese. Let's just say I was never accustomed to something sweet in my pizza and thus this dish didn't stand out on my list. I'd go for the pizza without the pears anytime but still this depends on your individual preferences. 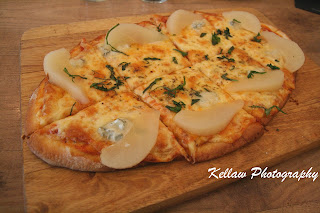 Then I got a little busybody and "ventured" into the kitchen to look at them preparing the desserts. This is definitely homemade. 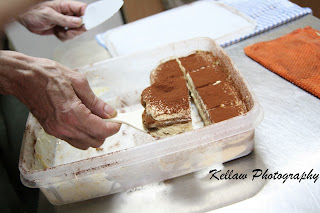 "That's the best Tiramisu you can get in Penang!!!" 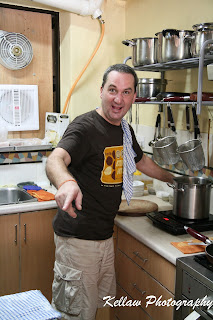 The other chef, Richard at work. 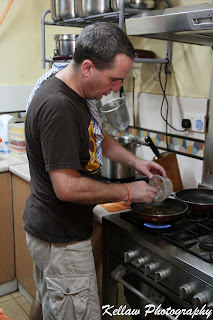 Michele preparing our Panna Cotta dessert. It's a type of jelly like pudding made by simmering together Italian cooked cream, milk, sugar and gelatin and then letting it cool down to a set. 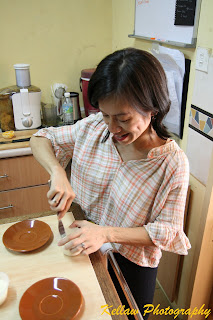 This is the cappuccino Panna Cotta with a touch of orange on the top. 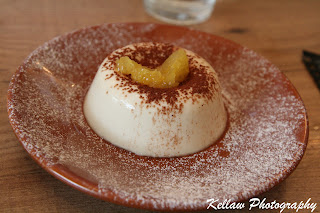 The more "original" lemon Panna Cotta. A refreshing dessert I would say. 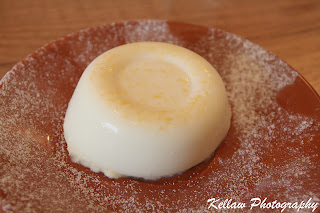 Then we have the main spotlights of desserts. The Tiramisu with homemade mascarpone. Like what the other chef says, this is the best you could get in Penang!!! 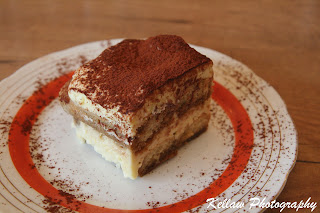 Then we have all sorts of coffees, ranging from hot to cold, cappuccino to latte to espressos. 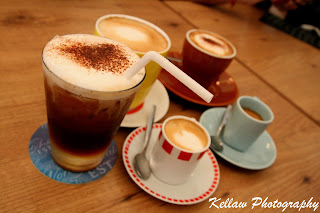 I would say that trattoria is a must visit and I am sure I would return for more.

Environment: 4/5  (Great place to hang out with good lighting. Could caters for small and big groups - square tables that could be stacked to make one long table)
Service: 4.5/5 (You are served by the owners themselves and one friend even commented that we seldom see such friendly owners)
Taste: 4/5 (Just Right!! Enough said!!)
Consistency: 5/5 (Been there like 4-5 times now and the portion, taste remains the same)
Price: 3.5/5 (Not really expensive for the ingredients given and portion size that is just right to make one full)
Facebook Page: https://www.facebook.com/pages/Soul-Kitchen-Penang/131793516842343