Lost? Ask for direction from an old lady(funny)

January 08, 2009
This happens a while ago when I still drive. Me and a bunch of friends are going off town to FRIM(Forest Research Institute Malaysia) for some sample collections. Yes those were the days and now I have a friend working with National Geographic Society. The problem with us is none actually know where the hell is FRIM and we relied on signboards.

Malaysian signboards being Malaysian signboards, they usually lead you to no mans land and my very mistake? Forgetting to get the map of the place which I usually do as I was expecting the driver to know the place. After an hour drive in the kancil going at 50km per hour(imagine how the ride would be like?), we found ourself lost in one of the villages.

Fine. The first sign that we are lost, we being the intelligent ones stopped and asked for directions from one of the stalls. Below is the conversation:-

Fine then, I just get back into the car and while my friend started the engine and moved about 100 meters, I saw the old lady standing at the road with an old man waving at us. We thought the old man would have known the direction and we turned back.

I told my friend what happened and he felt like strangling the old lady. So much so for asking for direction. When we reached the place, My friend started this stupid joke. I am recalling my best to tell it here.

A little turtle begins to climb a tree slowly. After long hours of effort, he reaches the top, jumps into the air waving his front legs until he falls heavily into the ground with a hard knock on his shell.
After recovering his consciousness, he starts to climb the tree again, jumps again, and falls the ground heavily again.
The little turtle insisted again and again after each fall, while a bird couple sitting at the edge of a branch, looking at the turtle with pain..suddenly the female bird says to the male:

Guess what is said? (answer hidden in CTRL + A) 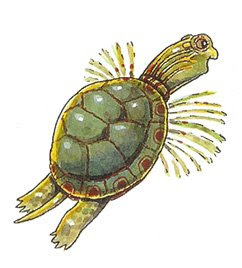 "Hey dear, I think it's time to tell our little turtle he is adopted."

Lisa said…
haha sometimes ppl's mind can make us so frustrated...
dunno what they r thinking especially the old lady
January 9, 2009 at 11:27 AM