Yes shit is still pouring in and no action had been taken. Here's the picture of my wound. It's getting better while the emotional wound is getting deeper among the members. 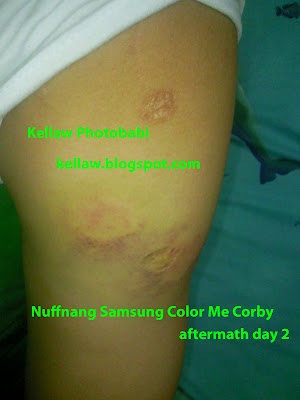 The level of discord had been multiplying as time goes by without action. Yesterday's post and my teammate's post had been on the Nuffnang Innit top 10 list for a long time. Both staying at top 2 and 3 spot. There had been messages going around on facebook, twitter about what happened. Enough bad publicity? I doubt it will end there till someone does something real fast.

On my side, a friend of mine messaged Timothy on facebook chat but still no reply. Is that how people react to criticism? Well my Korean friend was busy with work today but the draft of the complain letter is already halfway done. I think by tomorrow noon or latest on Wed noon, I will just get it to the post office to send it on its way to Samsung Headquarters in Korea. Nice? Yes this is what I am definitely going to do.

Oh yeah. Someone visited this blog from a Samsung.net inbox. Yes, I do monitor the traffic to this blog. I have all the IP addresses too. I think one of my friends actually recorded the conversation between the paintball marshalls and us when we asked about the event. If I can get it in time to burn on a cd, it will be on it's way to Korea with the letter of complain too. Yes I am pissed not because I lost but because we were treated unfairly and that nothing had been done so far.
events Life malaysia mobile mobilephone nuffnang paintball personal pictures questions rants samsung corby serious sunway extreme park technology telematch

atreyu strange said…
Hopefully, things will become better for you and your team. It's a great deal when you try to speak for your team here.
January 19, 2010 at 9:45 AM

aP[o]caLyPSe` AnGeL~ said…
I've linked u up on my blog without permission. And now I'm telling you. You don't have a choice =P

Kellaw said…
atreyu - thanks for the support. the team already somehow regard me as the team leader although there is no such position. i just hope things were more fairly dealt with for the whole team in general.

Unknown said…
heyy :) Still following the issue as I'd said in the Innit chat xD

Not just the event gone wrong, the PR value is also going to be affected by it. Yeah, you should complain, cause it's really not fair. If I were you, I'm also going to complain.

It was nice having you in the Samsung Nuffnang Color Me Corby Carnival last Saturday. Congratulations once again for your team's winnings as the first runner up from the day!

Regarding your dissatisfaction over the results of the Paintball game, the results were final as it was announced by the marshal from Sunway themselves. You shared that the marshal came to us, organizer (Nuffnang) to resolve complaints from the game and I've shared on the day itself that there was no such complaints put forward to me which was the fact. The marshal came to me and shared that Orange team had managed to retrieved the flag and won the game. He did share to me that Yellow team had made various claims which were untrue towards the winning team which among them was;
- the flag retriever was shot while carrying the flag but kept on running

As this was verified not true by the marshal, I asked for him to declare the rightful team as the winner which was Orange thus concluding the games. He further shared with me that there is a slight concern which was the flag retriever took off his mask right after he touched base, seconds before the referees call the match over which could result in serious injuries if he was shot in the face. I asked if he was hurt which the marshal shared no, he wasn't hurt. Apart from this slight concern, nothing was raised by the marshal to me.

Do bear in mind that the organizer was not put into any position to make any judgments on the paintball results as we are not qualified to do so. We merely declared the winners based on the information from the marshal in the paintball field.

It is within your freedom of rights to lodge complaints but we do hope that you are aware that the judges' decision for every contest/competition/event is final and abiding.

Thank you once again for attending the Samsung Nuffnang Color Me Corby Carnival Day.

victor - shit happens. and worse still when they try to cover it up with excuses.

nikel - of course. the more the merrier.

robb - the results weren't announced by the marshalls. that's why the organizers were asked to go back there which none did then. if you want, a meeting should be arranged with the whole team of both sides, the marshalls and the organizers from both samsung and nuffnang. i am sure this will solve the problem? no?

We have the whole team who talked to the marshalls and 3 of us who double confirmed after the event.

and reminding me that the judges' decision is final and abiding doesn't mean that the judge made the RIGHT decision. and in this case one that gives the easy solution to you guys and making it an unjust for the other team.

cr3ap - fair? if it's fair we wouldn't get the comment above you. I am definitely going till the end.

The Marshall say that he can't do anything only the organizer can.