May 20, 2009
One of my group mate had a bad hungover and was unable to come to class today. That fella practically got wasted after the drinking session which ended at 3 in the morning with him barely able to stand what more walk. He has to be dragged all the way home. Anyway it reminds me of this joke which 3 idiots partied whole night before their test.

They were boozing till late night and didn't study for the test which was scheduled for the next day. In the morning they thought of a plan and yes it's a genius one. They made themselves look as dirty and weird as they could with grease and dirt.

Then they went up to the exam invigilator and said that they had gone to an out of town wedding last night and on their return journey, one of the tyre of their car burst and they had to push
the car all the way back so they were in no condition to appear for the test. Yes there are some provisions for people who couldn't attend exams for the "most outstanding reasons" a.k.a valid reasons which makes you unfit or is at a condition where it's disadvantage for you.

The invigilator was a just person so he said that they can have a retest after three days.

After 3 days they said they were ready for the exam and they appeared before the invigilator. The invigilator said that as this was a special condition all of them were required to be in separate rooms for the test.

They all agreed as they had prepared well in the last three days. The test only consisted of two question with a total of 100 marks.

Want to know how the exam papers look like? 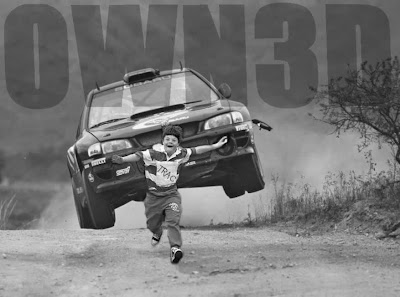 Moral of the story? Don't get wasted when you go partying at night and make sure you are able to get to work/class the next morning.

Kellaw said…
Ms Ang - lol. nice to have you here

haro genki - wun work la. how sure are you the others answers the same?

yian sin - not creative where the guys will die?

stephy - welcome to my bloggie

Coffee & Love said…
omg this is so funny ROFL